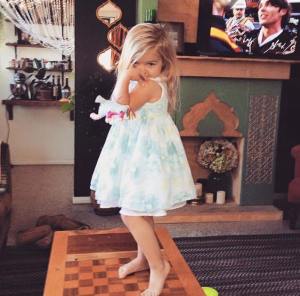 Beauty in the day: my daughter looked up from what she was doing to find this one doing…well, this. She asked her smilingly, “What are you doing, Jaffrey?” Jaffrey may have been waiting for this question, based on this reply:
“I’m just touching my shoulder. Can you take a picture?”

She may need a longer nap.

Beauty in the day: the imminent 2 week break is bringing out anxiety in more than one inhabitant of Ardmore Elementary. Take Little Aussie, for instance. He stood fidgeting in front of my desk, and I inquired (as per custom), “Can I help you?”
“Well, you see, I am wondering about the library books during the Winter Christmas break. When will I return those, please?”

“Oh! Good news! You won’t need to return them until you come back in January!”

Apparently this was not such good news, as I discovered when Little Aussie let me in on his thoughts. “Well, suppose that the books get lost over the break?”

“Oh! No worries! Just tell your mom to help you find a great safe place to keep the books when you’re not reading them!”

He had another concern. “Well, you see, we will have out-of-town guests at our house, so…I worry about that, then.”

“Oh! No worries! Just tell your mom when you get home, and she can help you find a perfect safe-spot for your books!”

“Yes. Well, you see, our guests will have pets.”

“Actually, I’m not really very happy about that. Perhaps one of the pets will put a tear in the book, or perhaps they might nibble on the cover, or scratch it, you see.”

This called for a different tack.
” No worries, Friend. I will send your mom an email and ask her to help you find a great safe place to keep your awesome library books. Good plan?”

The plan was an acceptable one, and he left with confidence. I sent the email immediately. Mom’s response added another dimension: they will be out of town part of the time, and the little guy imagined squatters on their premises while they travel. His only understood responsibility was the library books.

END_OF_DOCUMENT_TOKEN_TO_BE_REPLACED

Beauty in the day: she came in before school and asked to make a phone call. “I accidentally brought my umbrella to school, and I need to let my mother know, so she doesn’t get tense.”
😀

Beauty in the day: there was more than one. Or maybe it was that I was out of the office for the previous 2 days, so that the kids just seemed cuter? Nah…
Before school could even start 2nd grade girl comes into the office, and announced boisterously: “I just got the good news about ME.” Seems she is scheduled to receive not one, but TWO awards at our upcoming 1st Trimester Awards Assembly, and apparently she is getting an award for ART, as well as one for ATTITUDE. I didn’t even need to pat her on the back; she was doing just fine.

Not long after that I was approached by Daily 3rd grade boy, who came to me and asked, “Can I tell you something?” My eyebrow went up, and I said to him (I really did), “Well, if I say ‘no’, you’re just going to tell me anyways, right?” He confirmed this theory, and so I motioned for him to “please continue”.
“Never eat at Mcdonald’s. Or never eat at family restaurants – or, I mean, fast-food restaurants.”
I have to admit, I was curious.
“And why is that?” – it was a good question; I wasn’t disappointed.
“Because they put eyeballs.”
“They put eyeballs?”
“In the food. They put eyeballs.”
“And how did you come to discover this?”
“I saw it. On the menu.”
Since I had been gone the previous two days, I was clearly a bit out of practice, because I engaged him.
“I have seen the menu, and I have not seen anything about eyeballs on it. I am sure about this.”
He countered. “Well, what I mean is that I went behind the counter where they work, and I saw.”
This I could not refute. After all, I have not been behind the counter.
“And you saw EYEBALLS??!?!??!?”
“Yes,” he said with a marked air of authority. “But you can go to Red Robbin. They do not put eyeballs in their food there.”

Near lunchtime, Favorite 2nd grade boy who sometimes sings Spanish-Gaelic songs (forgive me, IRISH-Gaelic – the poor boy feels that I will never let him live that down) came in to the office with a small baggie in his grip. “I have brought some first aid things with me that I will use today to be a helper at recess, in case anyone gets hurt.” He had some bandaids, and gloves, and gauze inside. During the recess, he brought a girl in (he didn’t know she was a frequent flyer). He already had his latex gloves donned, and he escorted her into the clinic, setting about the task of providing her with an ice pack (note: the ice pack is the one tool that is used more than any other in the school clinic. If a child came in suffering from frostbite or exposure, they would ask first and foremost for an ice pack). He honestly had the bedside manner of a very fine physician.

Finally, 5th-grade-girl-who-was-doing-math came in with eyes that were bothering her. I came in to see that the school nurse had suggested she lay down and shut her eyes for a minute or two.
“I’m not sure,” I said, “but my eyes are bothering me too, I think, and I would like to lay down and shut them for a minute or two as well.” I laid on the other cot, and closed my eyes, remarking on how lovely that felt, which caused 5th grade girl (who was missing math) to begin giggling. Apparently I look very comical laying on a clinic cot.

Happy Day to any of you who had so many beauties in one day!

regarding beauty. every day.